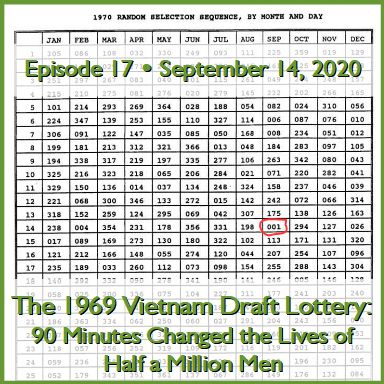 Why? Because if you were born on that date between the years 1944 and 1950, you were "number one" in the Vietnam draft lottery. Without a deferment of some kind, you were almost guaranteed to be sent to Vietnam.

In this episode, Stephanie explains the December 1, 1969 Vietnam draft lottery - the 90 minutes of American history that changed half a million lives.

To read Stephanie's feature article on which this podcast is based, visit this page.


The following sound effects and music (or pieces thereof) were used in this episode:
• Prize Wheel from tony-bear
• Last Post 3 from benboncan
• Civil War Music from adeluc4
All can be found at FreeSound.org.