The 1858 Sinking of the Eliza Battle: 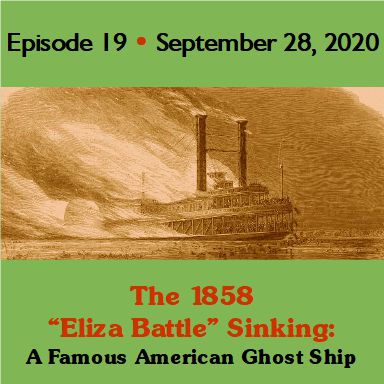 
In October 1857, British citizen Charles McKay left London for North America and an extensive tour of the U.S. and Canada. He was writing about his adventures for a British newspaper.

Six months into the trip, during a stop in Alabama, he saw the elegant steamship Eliza Battle moored on a landing along the Tombigbee River. Its size and grandeur made a strong impression on McKay. That's why, just days later, he was shocked to learn that the side-wheeled paddle steamer had burned, killing many passengers and crew in the inferno, or forcing them to freeze to death in the icy river water.

This sinking was, at the time, one of the largest losses of life on a United States river. Some residents of Nanfalia, Alabama say that, on a quiet night, they still hear the screams of the victims today.

To read Stephanie's feature article, on which this episode is based, visit this page: http://www.cloudedinmystery.com/ghost-ship-eliza-battle.html

For more information on this podcast, visit Stephanie Hoover Has That Story.