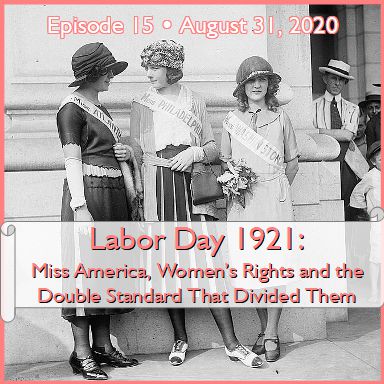 
On Labor Day in 1921, women across the nation were - for the first time - registering to vote in state primary elections. They had, just a year earlier, won this right and were now arming themselves for the next battle: equal pay for equal work.

Meanwhile, in the east coast beach resort of Atlantic City, nine "beauty maids" were competing in what would become the first ever Miss America Pageant. These contestants, as young as 16 years of age, hoped to win - among other prizes - a golden trophy worth more than many professional, skilled women earned in a year.

And, while this chasm between women's' priorities loomed large in Atlantic City, it was hardly the only social dichotomy. In 1921, nearly 12% of the nation's workforce was unemployed - a fact lost on the wealthy industrialists, socialites and political power brokers who'd arrived at the resort in luxury excursion trains, fancy new motorcars and yachts.

Truth is, among the monied class in Atlantic City on Labor Day 1921, thoughts were on everything BUT the men and women on whose labor this nation relied.

The following sound effects and music (or pieces thereof) were used in this episode:
• Old Marvel Player Piano from rtb45
• Follies from daveincamas
• Audience Clapping from Foxzine
• Brass Music from vollkornbrot
All can be found at FreeSound.org.

The photo of the first Miss America, Margaret Gorman, courtesy of the Library of Congress.