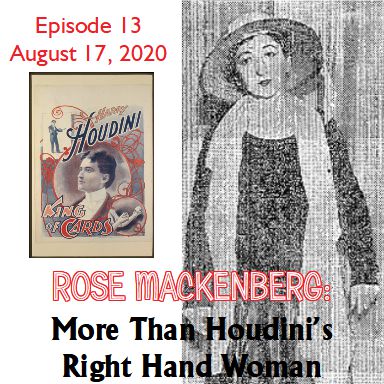 
Rose Mackenberg is often described as "Harry Houdini's investigator" or his "right hand woman." The truth is, though, that Rose had a longer career of debunking fraudulent Spiritualist mediums than her famous mentor ever had.

In this episode, Stephanie tells the story of the remarkable Mackenberg, a natural-born detective and "ghost buster" extraordinaire.

The following music (or pieces thereof) were used in this episode:
• Sad Horror Music
• Music from Creepy Handorgan - Für Elise
• Nightwwolf - Danger is Here
All can be found at FreeSound.org.


For more information about Harry Houdini's relationship with the Spiritualists, listen to: