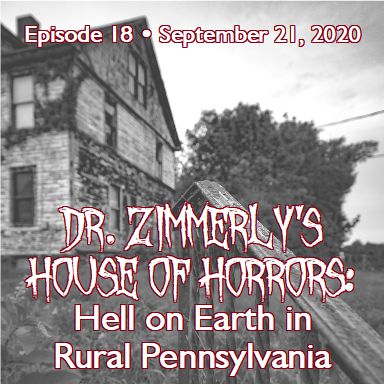 
In 1935, Gloria Lawson learned that she was pregnant for the third time. She left her home in Calvert County, Maryland for what she thought would be a brief visit to Dr. Harry C. Zimmerly's makeshift, back alley abortion clinic in Lancaster County, Pennsylvania. When she didn't return home after a few days, her family began looking for her.

No one was prepared for what was discovered at Zimmerly's rundown farm. In the driveway were bits of human bone interspersed with ash. In the "clinic" were bloody mattresses and rusty surgical instruments. And caught in a wire bedframe were strands of blond hair - just like Gloria's.

This is the story of Dr. Zimmerly's house of horrors, an illegal hospital where more than one desperate woman lost her life.

For more information on this podcast, visit Stephanie Hoover Has That Story.

To read Stephanie's feature article, on which this story was based, visit Hauntingly PENNSYLVANIA.


The following sound effects (or edited pieces thereof) were used in this episode:
• Four Voices Whispering from geoneoO
• Murmullos from sebbas414
Both can be found at FreeSound.org.